CANCELLED
Federal Bureau of Indian Affairs rejected application for this casino in May 2020. Details

THE CEDARS AT BEAR CREEK

The Coquille Indian Tribe wants to build a casino in Medford Oregon and name it "The Cedars at Bear Creek". The location would be in the southern part of Medford along the east side of Highway 99.

The Medford casino would be the second casino owned by the Coquille Indian Tribe. The Tribe owns and operates The Mill Casino Hotel in North Bend, Oregon.

In 2012 the Tribe purchased Roxy Ann Bowling Lanes and the old Kim's Restaurant which totals 2.42 acres. This land acquisition was submitted to the U.S. Interior Department to determine if it qualifies as a building site for a tribal casino.

In 2017 the Interior Department found the Tribe has the right to build a casino on that land once it is transferred into federal trust.

The Coquille tribe then applied the U.S. Bureau of Indian Affairs to place the land into federal trust. This is a multi-step process that is proceeding and a final decision is expected soon. 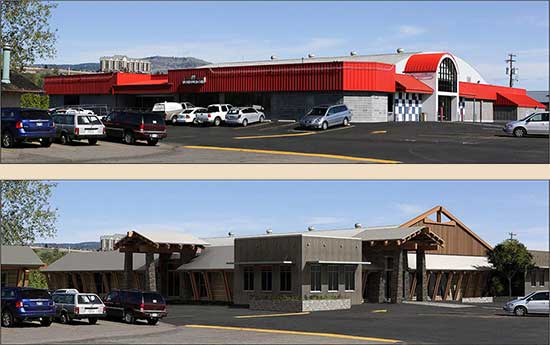 Medford casino application rejected by BIA June 15, 2020 - The Medford casino project is dead. The Coquille Indian Tribe, which owns The Mill Casino Hotel in North Bend, had plans to build a second casino in Medford to be named The Cedars at Bear Creek. ... Read more

This casino will offer Class II gambling as defined by the Indian Gaming Regulatory Act. Class II games are played against other players and not the house.

The Coquille Tribe's gaming compact with the state currently has no limit on the number of Class II gaming machines the tribe can operate.

The Medford casino project is dead. The Coquille Indian Tribe, which owns The Mill Casino Hotel in North Bend, had plans to build a second casino in Medford to be named The Cedars at Bear Creek.

Planning began in 2012 and proceeded with filing an application filed with the federal Bureau of Indian Affairs (BIA) to transfer 2.42 acres of land in south Medford into federal trust for the purpose of building a Class II gaming casino.

On May 27 Coquille tribal leaders received letter of rejection from the BIA. The letter was written by the principal deputy assistant secretary for Indian Affairs, John Tahsuda, who explained the application for the Medford casino is denied.

Coquille Tribal Chairman Brenda Meade was upset by the decision and said:

"By ending the normal, fact-based process for making trust land decisions, Tahsuda has silenced the many people in the community who are supporting our efforts. He also is denying our local officials the opportunity to express their growing appreciation for the tribe's work in the community and their interest in pursuing economic development on this property. They all were promised that their voices would be heard every step of the way."

The Coquille Tribal Council will consider the options and decide what steps the tribe should take next.

The Coquille Indian Tribe plans to build a casino in Medford on the 2.42-acre site of the Roxy Ann Lanes, which it bought in 2012 for $1.6 million. Since that initial purchase, the Tribe has bought or leased additional land around it.

The land now leased or owned by the tribe is about 45 acres. It includes a quarter-mile of frontage along South Pacific Highway.

Plans have not been announced for these properties and will not be finalized until the federal government announces its decision on the Tribe's application to place the original 2.42 acres into federal trust for the purpose of building a casino.

The proposed project would allow for the Coquille Indian Tribe to build a casino where currently there is a bowling alley. Tribe, as of now, has a casino in North Bend. This would be their second casino if approved.

The two senators have set a letter the U.S. Department of Interior. The letter was addressed the assistant secretary of Indian Affairs, Kevin Washburn. It was expressed in the letter that the proposed casino is being opposed. Support of the opposition also includes commissioners of Jackson County. As well as Gov. John Kitzhaber.

Much opposition has been given to the proposed Medford casino. The Coquille Indian Tribe wants to open an additional casino. This has many speaking out against it.

As of now there are nine casinos in Oregon. All of them are tribal owned. At North Bend, on Central Oregon's coast, the Coquille own their casino. They want to transform a bowling alley in Medford into their second casino location.

The Cow Creek Band of Umpqua Indians own a casino north of Medford. Their fear is the new casino would hurt their business.

Medford is 165 miles away from the Coquille casino in North Bend. The U.S. Bureau of Indian Affairs has been asked by the tribe to put property in Medford into a land trust. If approved the Medford property would be considered part of the tribe's reservation land. Therefore allowing for the development of a casino.

Currently the Indian Gaming Regulatory Act of 1988 allows for tribes to developed casinos in locations where they choose. On September 19 there was a hearing by a congressional panel about the proposed casino location. It was advised that certain portions of the gaming act should be rewritten to discourage tribes from being able to build casino so far from their tribal land.

This week there is a meeting planned between local officials and the Coquille tribe. The meeting is to discuss the tribe's proposed casino project in Medford.

The Coquille plan to use a Medford bowling alley that was purchased as the building location. The Secretary of Interior has also been notified that the tribe would like to place the land into trust. If the casino project is approved, they will operate 600 gaming machines.

It was agreed upon by the governor and by the state's tribes that they would each operate one casino on their reservations. Casinos would not be approved if built off of tribal land.

If the Coquille receive their approval, this will be the second casino for the tribe. Currently the tribe operates the Mill Casino.